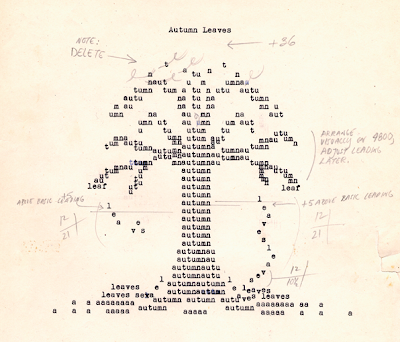 The first WYSIWYG (What You See Is What You Get) that I encountered was the Compugraphic 4800, ca. 1983. It was a standalone module with built-in keyboard. After having command-keystroked the job, the operator could then display it in WYSIWYG form.

Shown above is the typescript of an original typewriter poem a former student of mine composed as a class assignment in 1969.

The handwriting alongside the poem is the markup I gave the Compugraphic 4800 operator. The obvious typeface to have used was American Typewriter, but for some reason—delirious, no doubt, from a bad case of “serious-osity”—I called for Zapf International Light. Today I would call for Schmutz or FF Trixie.

The tree displayed in orange on the screen. The refresh rate of the 4800 was slow, and it took approximately thirty seconds to “draw” the tree. As the image displayed from the top down, one could not “grow” the tree. And as my impulse for setting the tree in the first place was the potential for interactive effects, I did not continue along these lines.

When I informed the operator of this decision, she gave me her absolute best “I could have told you so” world-class smile.
Posted by P Gallo at 9:37 AM