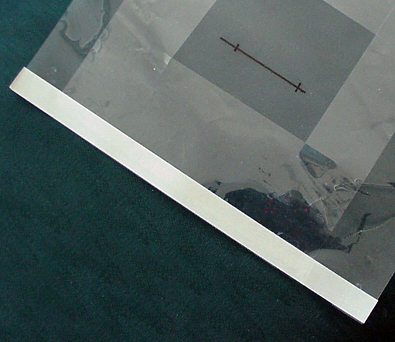 Several people have had questions about the sketch I posted on 8 January 2010, entitled Frisket-Carrier Sheet.

When I drew the sketch I should have shown that the two sheets are taped together to function as a unit.

Pictured is a replica of the one that I originally used to print the visual poem, daffydowndilly.

Note the inked line on the carrier sheet for registration of the word daffydowndilly to align with the crossbar of the ff ligature of the watermark.
Posted by P Gallo at 2:03 PM No comments:

Copy Out The Window

I remember a client whose stationery bore the headline DON’T CHANGE A WORD, printed in red, all caps in 96-point Franklin Gothic Bold Condensed.

For that client it was “Copy out the window.”

However as a veteran typographer I have often had to take many liberties with copy; and in some instances I was granted permission ahead of time to do so.

So I would offer an alternate setting. It might simply be an abbreviation or deletion of a superfluous word. Or the breaking out of a new paragraph from a long paragraph. Or the running together of two short paragraphs into one.

For the printer/bookartist this is especially important in the writing of a prospectus or colophon—and especially, artist statement—where one is trying to arrive at both a succinct statement and one that is typographically elegant. Nothing worse than a poorly set artist statement with a lonely widow at the end of the graph.

This may seem like a cynical approach to writing, but you might already have taken the first step down that road in having agreed to write an “artist statement” in the first place.

That last comment notwithstanding here is a little How-To.

Let us say you want a justified copy block with the last line going full measure. Experienced typographers work backwards. That is, they rework the last line of the paragraph first, then work towards the front. By working in this fashion should there be a difficult line you can sometimes “bury” it in the center of the graph.

Also this allows you more liberty in revising copy. And especially so, if the last line of the paragraph is a killer line that must be maintained.

Or you may simply want to create a triangular shaped ending to drop in a tailpiece as the early printers were inclined to do.

You may not be Edgar Allan Poe but there is no harm in knowing how to achieve an effect. That way when you want to show your stuff you will actually be able to do it. Like a triple Lutz, for instance.
Posted by P Gallo at 4:56 PM 1 comment:

Close to the Edge 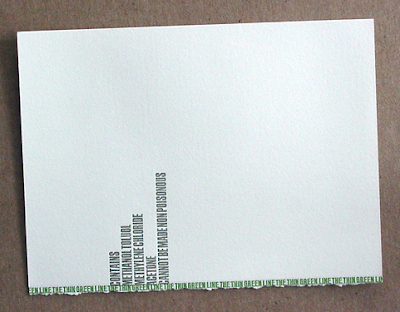 Over the holidays I received a handmade card that had a double-colored hand-torn deckle edge. I liked the presentation of the colored deckle, and it suggested a typographic approach for a visual poem. (Now printed and shown above.)

I had some offcuts of Rives BFK which, as the deckle edge is relatively uniform, was the ideal paper for the job at hand. Unfortunately I didn’t have enough offcuts for the entire job, so I had to tear down some sheets by hand; but even those loaned themselves to the desired effect.

Part of the effect I was looking for was degrading of letterform as the type prints on the deckle. Encouraging me to do this is the fact that legibility studies have shown that the upper part of a letter is the most important in character recognition. As it turned out, however, degraded letterform did not come into play as much as I had anticipated.

For the baseline I used 8-Didot Inserat Grotesk—as it fit the deckle perfectly—and 12-Didot Permanent Headline for display, both original foundry faces from Haas and Ludwig & Mayer.

Appropos of these comments I offer this poem from A Printer’s Dozen.


The Truth About Margins

In the 20th Century we trim
To bleed. How unlike the ancients,
Who gravitated toward
The center of things. Now,
How close to the edge?
In this houseful of objects
Other men have made,
I recall Fairbank’s love of letters:
“Because he lacked facility
to draw.”
The generosity of genius,
And the anonymity of type—
Where to stop with other men’s ideas?


reprinted from A Printer's Dozen
Courtesy of The Bieler Press, Los Angeles.