In my previous post, “A Study in Serifs: Part 2,” I referenced a poem.

Someone asked for it. So here it is:

Once because “Truth is stranger than
Fiction,” the Byzantine fell
Coincident with the True.
That they could follow Truth for the wrong reason
Gave them white hair.

If you ask them about it
They put on the mask of the reticent father,
Whose sense of history
Demands History be his judge.

Instead one of them told me, “Genius
Is to be feared. Trust me, there is danger
In knowing too
Much. Kiekegaard and Nietchze for example
Who were so smart they were unhappy.”

Consequently they are benign, beneﬁcent
And, if there is such a word,
Polypleasant. They are also evil.
In an inventory
They are the term that cannot be right.

It comes from not caring. They don’t care
Because inventories
Are like January White Sales
And words are marked down
Like this: “The word for Trust

Should parallel Choice. And the word for Choice is
Keeping the options open.”

A Study In Serifs: Part 2

Recently I set some type for an inscription that was to be sandblasted into limestone.

The client was not conversant with typeface nomenclature, but told me that the setting supplied by the landscape architect was too “heavy and clunky.”

On screen the PDF file looked all right, but when I magnified the type to its correct size (3-inch cap height) I could see that the serifs were squared off and the strokes of the characters too uniform.

The concept of typeface families is a way of meliorating this problem, where the Thin, Extra Light and Light versions are intended for large display work. Unfortunately there was no adequate display version available.

I ended up suggesting Centaur as a replacement, as I thought that Centaur maintained the correct balance, between stressed strokes and bracketed serifs. Pictured below is the Centaur overlaid the supplied sample: Minion Pro.

An obvious choice might have been Trajan, but I was disinclined as that has become as ubiquitous as Palatino became in the 80s. Nevertheless I did review it, and thought that in this instance, the Centaur was superior.

Of course, my choice may not be a deﬁnitive solution. So I invite others to peruse their typeface collection and offer an alternative*.

*By the way, there is a difference between alternative and choice. And as a matter of fact I happen to have a poem on the subject.
Posted by P Gallo at 8:06 PM 1 comment:

A Study In Serifs: Part 1 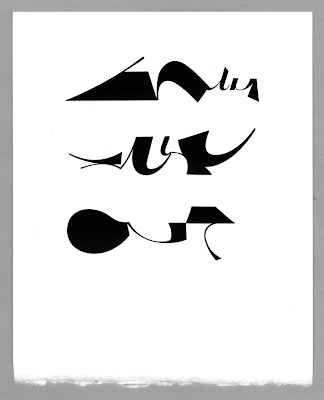 If you have ever had to identify a typeface so that a correction can be made to existing copy, you may have had to resort to a magnifying glass in order to assess the weight of a stressed or unstressed stroke, or to reveal the mystery of the serif in its many manifestations.

But what happens when you D-I-V-O-R-C-E these serifs from their original letterforms? Well, if you have any talent, you might come up with something similar to what the visual poet Scott Helmes has created in his Haiku Series, poems constructed entirely from parts of letters.

And where better to explore the straight line tangent to the curve than in the pages of Harper’s Bazarre, the exquisitely balanced female form complementing the full-figured Ultra Bodoni, and her pale companion, the anorexic Hoeﬂer Didot?

Above: Haiku #92 [letterpress on Fabriano and Arches; 6x7 inches]. Copyright ©2011 Scott Helmes
Below: a cut-up letter from Harper’s Bazarre 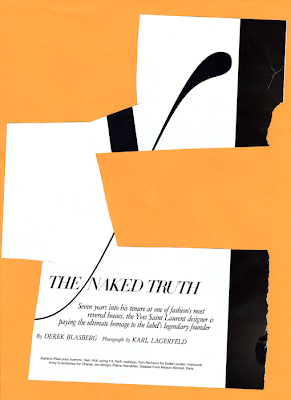 Print. Trip. Print. Trip. Probably you’re so used to Trip/Print you’ve never thought what might happen if that Trip lever was not working. Well, the press would print the cylinder on the return stroke.

Or as happened recently on my SP25, what if the whole mechanism locked up, and you couldn’t even advance the cylinder beyond the feed board.

When that happens, it's time to consult the manual and study the intricacies of the print/trip mechanism and the “trip spring” which actuates the whole thing. 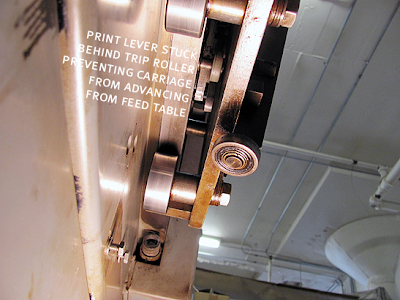 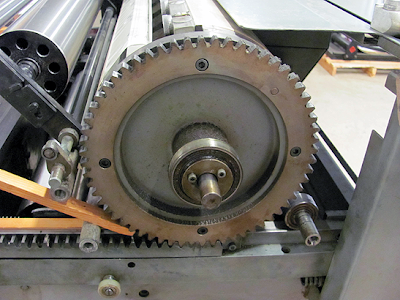 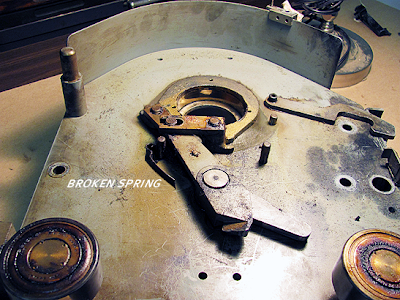 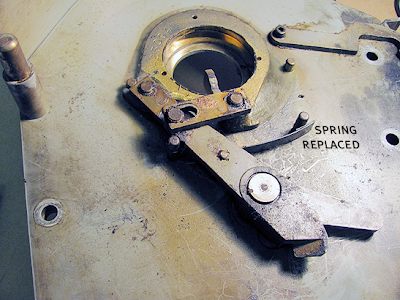 Shown are four pictures I took while I and a fellow printer removed the side plate from the cylinder in order to get at the broken trip spring.

The first picture shows the undercarriage, with the print lever lodged behind the trip roller. As I could not advance the carriage from the feed table I was unable to get at the trip spring.

Otherwise I could have got at the broken spring, when I ran the cylinder to the end of the press bed.

Once we got the side plate off, the broken spring was quite apparent. On close examination of the break, it appeared as if the spring had broken a long time ago, as the break was dirty, and the broken half was nowhere to be found.

(The press is operational with only one spring.)

As to how the print lever got hung up behind the trip roller: I think that may have happened when I “short-stroked” the cylinder. That is, I advanced it in Print, then changed my mind and brought it back, without having gone far enough to go into Trip.

As a rule I always complete a print cycle, even if I know the sheet is misregistered; as once you get into the middle of the press and try to return the cylinder, the sheet can hang up and catch in the rollers, creating a very inky mess.

I received considerable advice from friends and colleagues, most notably, Paul Moxon, who sent me a list of the steps in removing the side plate.

So you are looking at removing:
- tie rods holding the two side plates together
- oscillator assembly
- roller support, if present
- trip bearings

(Note in the upper-right-hand corner of the second photograph, what may be called a synchronistic curiosity or prestidigitation: the tiny No. 01 Ball Bearing Vandercook Proof Press, seemingly tucked under the feed table of the SP25.)

I ran into a situation on a two-color job where I needed to print a polymer plate and type at the same time.

Fortunately I was running the two colors in quick succession by using two presses.

All of this was an expediency caused by the fact that although the job looked lively enough on screen, the print itself needed some help.

Hadn't I been able to do this, I would have had to revise the original file, output new film, and make new plates.

In the past ornaments of this kind were available from ATF in Handipacks. And any job printer would have had at least one case filled with ornaments.

Today however, with many printers exclusively running photopolymer, one might consider outputting film of ornaments so that should the occasion arise one would have some “ornaments” available.

(Of course, my saying this, implies also that I still do some “designing” on press.)

A good starting place might be the wonderful selection of penline flourishes available in Minion and Poetica. Many are similar to the Civilité ornaments, which at one time were available in ATF Handipack 73.

Something that might be kept in mind is selection of size. It is not by accident that the size differential in foundry ornaments goes up by 6 or 12 points at a time, as this is a sufficient jump in size to allow for various applications.

Now you can create you own “Handipacks.”
Posted by P Gallo at 12:35 PM No comments: 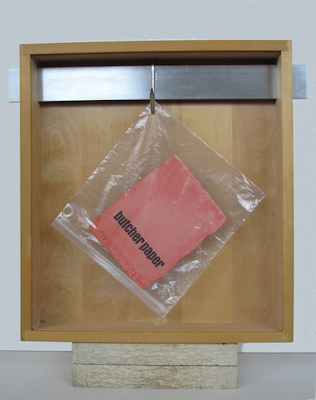 Recently I applied for a grant, and in the process of assembling images, I was surprised to find so many that dealt with environmental issues.

So I decided to make that the focus of the application and came up with the necessary eight, one of which is posted here, done in 1986 with the assistance of Dean Lindblad.

I think that the selection of materials reflects the ambiguity of compromise involved in the potentially controversial aspect of a piece like this.

The plastic bag hangs from an industrial-grade stainless steel meat hook, which itself depends from a .25-inch by 3-inch by twenty-four inch aluminum bar fitted into a white pine box.

The paper is a handmade from Twin Rocker, with a brushed on, slightly thinned-out Lewis Roberts Venus Red.

That is, in the making of the piece is there not a violation of the principle of the piece?

A little food for thought, perhaps, when next you find yourself perched at the bar with a raptor-like gaze.
Posted by P Gallo at 4:34 PM No comments: 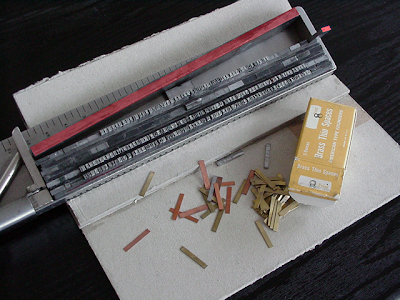 Pictured above is a composing stick with three lines of eight-point Eurostile Normal, set to a measure of fifty picas

With all that spacing material inserted between every character the line becomes so springy, that when you insert that last quad (colorized red) the whole line may buckle and spring out of the stick.

To prevent this I use a six or 12-point slug tight against the line before I insert that last quad—for purposes of illustration I have shown the slug pulled away and also colorized.

Note that the stick resides in a kind of cradle. If, for want of space in a crowded shop, you have ever set a half-filled stick down against a galley or typecase, only to see it slip and dump its contents, you may want to make a cradle like this.

But wait! Why would anyone set eight-point type all caps when all you have to do is hit CAPS LOCK or command-shift-K?

Good question. Which I think is rather neatly addressed in a poem by Philip Larkin, entitled The Poetry of Departures, the last line of which I have used to name this post.

A neat skewering, I think, of the Romantic Thrust. Or, another nail in the coffin of the handpress.
Posted by P Gallo at 10:56 PM No comments: